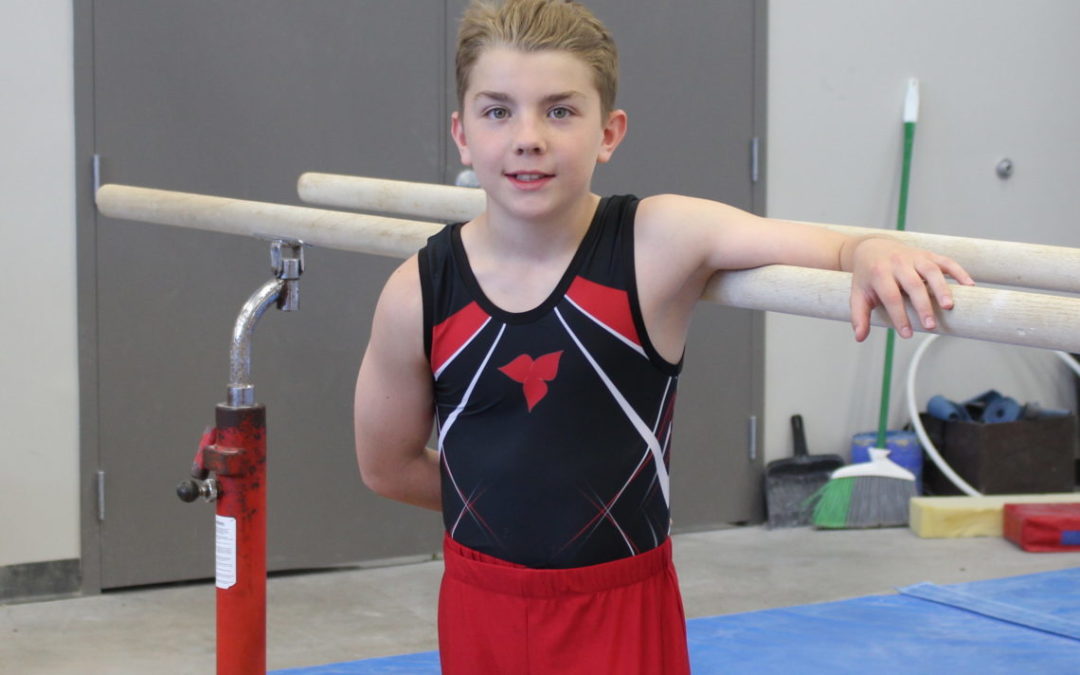 Will McNevin would have loved to have finished his competitive gymnastics season with a strong showing at the Gymnastics Energy Boys Invitational.

Unfortunately a broken finger got in the way of that happening. He first jammed his finger playing dodgeball, jammed it again the next day playing basketball and then putting the finishing touches on the injury when he got whacked in the finger playing mini sticks. He will miss two weeks with injury.

Before the mishap, the 13-year-old Gymnastics Energy member recently completed an excellent season, He placed third all-around at the Ontario championships which earned him a spot on Team Ontario competing at the Eastern Canadian championships May 10-11 in Prince Edward Island.

Competing in the Boys Provincial Level 4 under 13 division, Will placed seventh all-around and was second on the vault. Athletes competed on pommel horse, rings, parallel bars, floor, vault and high bars.

“He learned a new vault between (Ontario) championships and Easterns, he performed it and he nailed it,” Gymnastics Energy coach Brandes Struger-Kalkman said.

The Grade 7 student at A.K. Wigg Elementary School in Fonthill was happy with his performance at the Eastern Canadians.

“I stuck most of my landings and I got second on vault for that,” he said. “I did a bit bigger skills on vault and my floor routine was pretty clean.”

Will felt little pressure competing at the championships for the first time. Last year, he and four of his Gymnastics Energy teammates were selected to compete with Team Ontario at the MAG Tour in Calgary, Alta.

“I have been pretty calm, except for the first two competitions of the year because it’s kind of like you are getting back into it.”

His strong showing in Prince Edward Island mirrored his performance at the provincial championships.

“For him, it all started with him hitting the pommel routine,” Struger-Kalkman said. “We started with the pommel horse and that is one of the hardest events for boys of that age.”

It is Will’s first year using that apparatus.

“I tell my boys all the time that if they hit pommel horse they have a chance of winning,” Struger-Kalkman said.

Will has been involved in gymnastics for seven years and has been competing for the past five or six years. He brings a lot to the table.

“He’s very strong, he has quite a bit of natural talent and good gymnastics sense,” Struger-Kalkman said. “He learns skills rather easily and the routines that he does are very strong and solid most of the time.”

Will followed his best friend into the sports and continued on when that friend stopped.

“I kept doing it and I started to enjoy it once I started doing more stuff that just cartwheels,” he said. “It gets pretty fun and I love it.”

Will has been training 16 hours but is planning on increasing it to 20 hours a week this summer.

“I really want to work hard in the summer to get better skills and perfect them. And my parents are pushing me too,” he said, with a smile.

He’s ready to put in the hard work because he wants to reach the goal he has set for next season.

“I want to come top three at all my competitions,” he said.